Downsizing ahead of time to achieve work-life balance 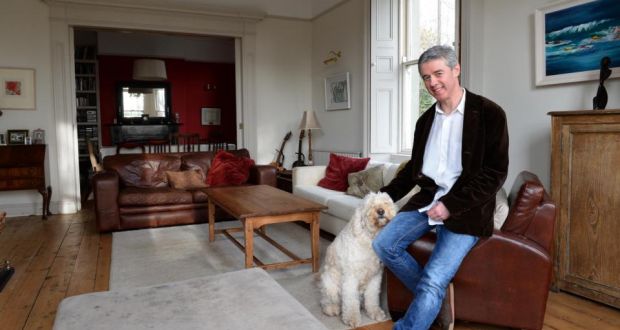 “Our youngest is five, our eldest 15, we’re out of the baby stage, so maybe it’s time to do other things,” says Eoin.

So now the couple are planning to move on again, to sell the six-bed that they bought for €950,000 in 2010, and downsize to something a little smaller in Greystones with their four children. Rostellan, the couple’s semi-detached 3,850sq ft (357sq m) six-bed Victorian close to the centre of Greystones, is for sale by private treaty through O’Gorman properties for €1.24 million. (In 2000, the house had sold for around €1.075 million.)

“We feel that we’ve worked as hard as we could since we left college – but is that how we’re going to spend all our kids’ lives when they’re little? Both of us have to discuss if one or both of us can wind down a little.”

Rostellan, built in 1894, had all its handsome Victorian details intact when Eoin and Ciara moved in. These include large centre roses, decorative cornicing, marble fireplaces with decorative tiles inset and a striking gallery-style staircase rising to three bright landings, off which are the six bedrooms.

Since buying in 2010, the couple have installed zoned central heating, put in insulation, done roof repairs, fixed plumbing, modernised the kitchen and extended at the back to add a bright breakfast-room with French windows at each end opening onto the garden. There are working shutters on double-glazed sash windows upstairs and down.

Rostellan, home to four children and a large curly Labradoodle, Jessie, has a comfortable, lived-in family feeling. Accommodation is generous: the drawingroom at the right of the front hall is dual aspect, with a large, deep bay window looking over the front and another window at the side. It opens through interconnecting sliding doors into a deep red diningroom; French doors from here open onto steps down to the garden. There’s a bright family room on the left of the hall at the front and a neat study as well as a small utility/shower room.

A striking modern light fixture hangs over the bright stairwell and there’s a large red and blue stained glass window on the first landing. There are two bedrooms and a family bathroom here and three more bedrooms on the second landing.

The main bedroom (over the drawing-room) at the front of the house is dual aspect, with views over to the sea from the side window. Both this and the other front bedroom are en suite.

Another large bedroom on the top landing (all bedrooms are double) is a comfortable au pair’s room, big enough for a bed and sofa. There are plenty of bathrooms, from a small downstairs toilet to a large modern family bathroom and good-sized en suites in three of the bedrooms.

Outside, there’s a quarter-acre of garden, mainly at the side, with lots of off-street parking, useful on Killincarrig Road, which is a short walk from the bustle of Greystones village centre.

The couple plan to stay in Greystones but hope to find a five-bedroom house perhaps 2,500sq ft (232sq m) in size “that’s not too challenging,” says Eoin. They see the next house as their last.

“We’d rather move somewhere suitable now that will be the kids’ family home forever and that will still be manageable when we’re in our 80s than downsize later, in our 60s.”